VegNews issued a formal apology yesterday and even used the term “screwed up” mentioned in my article!  You can read the VegNews apology here, which also includes a written policy on their photography practices going forward.  I am very happy to hear this good news. I will keep an eye on their website and check them out at the newsstand and if they pass muster then I will go ahead and subscribe. Yay vegans and Yay VegNews!

Subscribe to VegNews? You may want to reconsider. It was just exposed yesterday by QuarryGirl (thanks QuarryGirl) that VegNews has been using stock photos that actually contain meat in the pictures in their magazine and on their website. WTF? Funny thing is that I had recently been thinking about subscribing to VegNews. I’d been following them on Facebook and checking out their website. Since I am newly vegan, and since they are the only vegan magazine available, I thought it would be “cool” to subscribe. I no longer believe that they are cool, but just a bunch of liars. They have pictures of ribs (that are supposed to be vegan) with the bones photo-shopped out! Come on. Really?

I followed the breaking story this morning and read many of the comments online from various sources, with no response from VegNews. Then VegNews released a response and it was lame. They did not apologize, but instead made excuses about money and bragged about awards and said they would try to do something about it soon. Umm – they need to hire a PR person because they really missed the opportunity to get it right.

Now, I used to work for a retail website and took pictures of products and Photoshopped them. It is time consuming and requires a lot of attention to detail. However, the site I worked for would never consider using a photo of one product to represent another, which would be deceptive. And, if they can pay someone to edit a photo from iStockphoto.com to make it look vegan, then they certainly could pay someone to take pictures of real vegan food, or better yet use vegan stock photos, of which there are plenty. They weren’t even crediting the photos to iStockphoto.com, which is a requirement for use. Lying is not a good business practice and does not lend to journalistic integrity. What if I used fake pictures for my recipes? It makes me question everything they have done. IF you read their response it is filled with BS and lies. 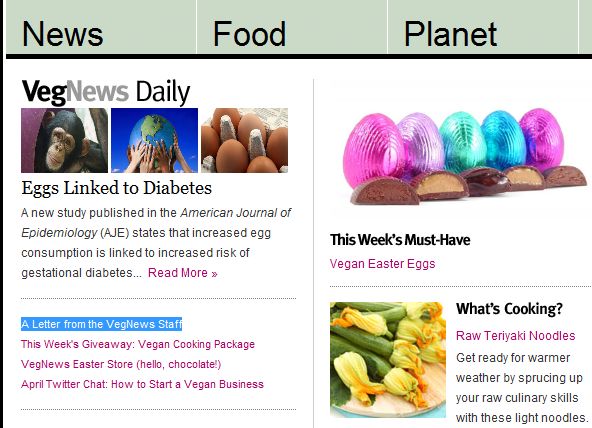 I cannot begin to explain the unethical nature of their actions or why they did it, although they tried to explain it away. But, excuses are like a**holes. Everybody’s got one. Certainly they have done some good in the world. I guess my problem is that their letter to their readers sucked. Not only was it in PDF form, making it harder for search engines to find and index, it was just a small blurb on their site entitled “A letter from the VegNews staff.” That could be about anything! Why not just come out and call it like it is and say you screwed up and that this is unethical and a dishonest practice and that it will stop. And, while your at it issue a real heartfelt apology. Surely this story will end up on the news, and other major websites like Huffington Post, if it hasn’t already. Better to to some damage control than do some corporate crap press release that doesn’t really address the issue.

Trust is so important, especially when it comes to a small niche market like veganism and the food we put in our bodies. Do you trust VegNews at this point? I don’t. Deception on this level does not lie. A better source for vegan news is the bloggers online who spend hours writing and taking their own photos. What do you think?