I love pizza. Most people do. Luckily vegan pizza has come a long way in the last few years. My girlfriend wanted some vegan pizza the other night after a hard day at work. Comfort food? Yeah. So, I looked online and found a pizzeria a few miles away that serves vegan pizza. It’s called Sammy’s Woodfired Pizza in Carlsbad, close to San Diego, CA. They have several locations in San Diego, Southern California, and Las Vegas. See below for important caveats for vegans. Want a free pizza? Keep reading. 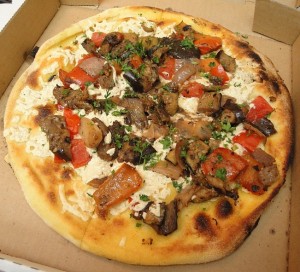 I called and asked all the right questions (so I thought – more later) and ordered their vegetarian pizza to go, substituting Daiya vegan cheese for the regular cheese for a $2.00 upcharge and xing the fontina cheese. It had grilled eggplant, onions, zucchini, bell peppers, and tomatoes, with a roasted garlic sauce. They couldn’t tell me on the phone which brand of vegan cheese they use. So, we went to pick it up and I spoke with the chef and told him I wanted to be sure it did not contain casein. He was kind enough to check and informed me that they use Daiya cheese. Yay! He said he hadn’t tried it yet and I chuckled and told him it is really quite good. Anyway, thanks for checkin’ chef. Hey, they have gluten-free pizza, too.

The atmosphere at the restaurant was quite nice with a warm ambiance and very busy. They have a little patio with a fire pit and the woodfired pizza ovens are on full display. We agreed we would have to go back for the full experience. We got two vegan pizzas because they are kind of small and there is only one size. We got home and opened the box and a beautiful vegan pizza stared at us and smiled. 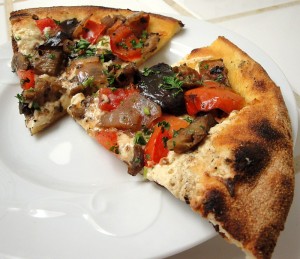 Their vegan pizza is excellent. Especially, the grilled veggies. The eggplant had a wonderful texture, much like mushrooms, and the flavor of the roasted garlic sauce with the Daiya cheese was a nice combination. Everything was very well-balanced and tasted oh soo good. Nom nom nom nom.

The crust was pretty good. The crust. Ok. So, after we ate both pizzas I emailed Sammy’s Woodfired Pizza to just triple check all my facts before I posted this up on the interweb. I am new to this whole vegan thing, so I was remiss in asking about HONEY! Bah. Turns out I needed to ask a lot of questions.Lesson learned. See below for important caveats for vegan pizza at Sammy’s Woodfired Pizza.

It would be nice if they DID advertise a vegan pizza on the menu, so that it would be clear to their employees and customers exactly what to order that could be considered vegan. Hey, but now YOU know. Also, their website is not up to date with all of their locations. There are a few not listed on there. You might try Google Maps instead. FREE PIZZA? Join their Insider E-Club on their website and get a coupon for a free pizza with the purchase of a menu item of equal or greater value. You can also follow them on Facebook or Twitter for deals.

I called and spoke with their corporate chef, Jeff, and got more information. He said they are working on a vegan menu. Hooray! Go Sammy’s. Go chef Jeff. Here’s what you need to know in the meantime.

The verdict. Awesome good vegan pizza. My girlfriend already went back. We will continue trying vegan pizza here in San Diego and I hope to make my own very soon. To avoid any controversy, the pictures here of vegan pizza are not vegan since I didn’t know the regular crust contained honey. 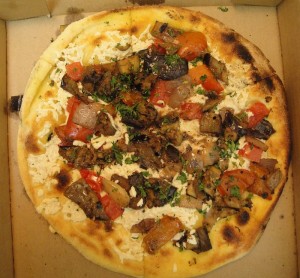 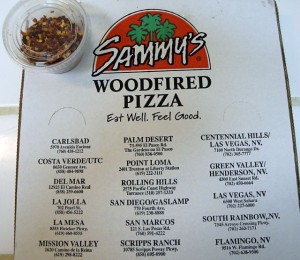