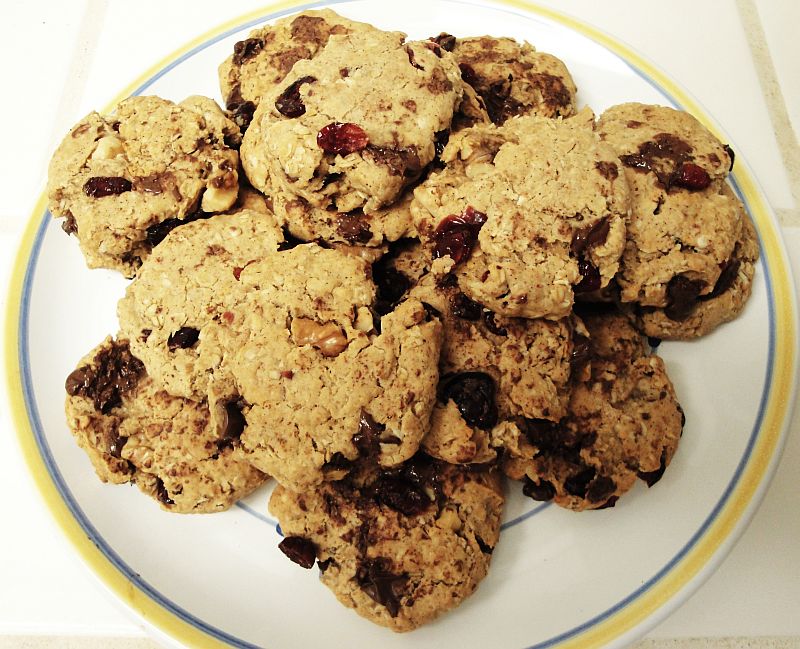 Do you like Vegan Oatmeal Craisin Cookies With Chocolate Chips and Walnuts? Me, too. Ok. I am not a baker, but when my girlfriend (who usually does the baking in one of those Village Bakery machines of hers) wasn’t feeling well and I was craving some Vegan Oatmeal Raisin Cookies, I decided to give it a go. I kinda sorta followed a recipe for Chewy Oatmeal Raisin Cookies from one of my favorite cookbooks; Veganomicon, by Isa Chandra Moskowitz and Terry Hope Romero. It turned out pretty good even though I broke all the rules.

Ha ha. It is my understanding that baking is more of a precision science than cooking, but I bake like I cook; on the fly, often making stuff up as I go.

Ways I broke the rules or changed the recipe:

BAH! Even though I pressed them down some prior to baking, when I went to take them out of the oven at the 12 minute mark they were these round puffy things. So, I had to quickly get a glass and press them down and bake another 2 minutes. I thought they would be like the Pillsbury cookies I made growing up and spread out a lot. I was wrong. I also failed to see the yield of 30 cookies until after I made them and ended up with 18. Their recipe said to make the dough pieces “walnut sized”. Apparently, my walnuts are bigger than their walnuts!!! You can see in the picture where the chocolate is smudged around from my pressing them down with a glass. 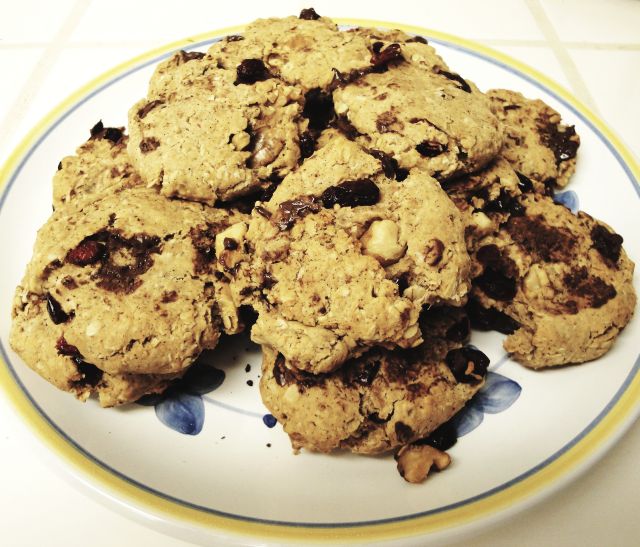 In spite of my unintentional efforts to screw up this recipe, these cookies actually turned out quite tasty. In fact, I thought they were just ok when they were warm, but the next day they were VEGAN YUMMY AWESOME! (Shh – don’t tell anyone, but I even had a couple for breakfast).

So, what did I learn? If you want Vegan Oatmeal Craisin Cookies With Chocolate Chips and Walnuts (or any baked goods) do not turn to me for a recipe or advice. I learned that I CAN bake cookies in a pinch, that I need to invest in a sifter, that I probably need some allspice in the cupboard, and most importantly that I should leave the baking to my lovely vegan girlfriend. She does a much better job than I do.

I would also like to commend Isa and Terry for creating a cookie recipe that even I couldn’t screw up. I wish I could link you to the recipe, but encourage you to buy their book, or check it out from the library.

Here’s one of my favorite funk songs about a Cookie Jar. It is a bit obscure and by the 70’s funk band Parlet. Stay funky and stay vegan.